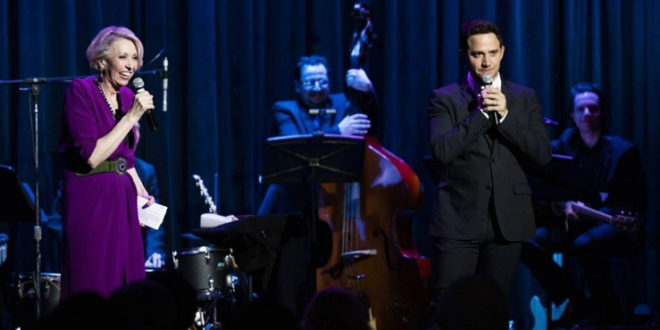 BROADWAY BELTS FOR PFF!, a benefit for the Pulmonary Fibrosis Foundation (PFF) raised a record $400,000 on  Feb. 25 at Time Square’s  Edison Ballroom. The event, hosted by Broadway actress/comedienne and PFF advocate Julie Halston (Broadway’s Tootsie), drew more than 250 patrons for an evening of music, comedy and performances.

The star-studded gala supports programs and research to advance a cure for pulmonary fibrosis, a life-threatening disease which causes progressive scarring in the lungs. More than 200,000 Americans are living with pulmonary fibrosis and 50,000 new cases are diagnosed each year. BROADWAY BELTS FOR PFF! is the largest single fundraiser for the Pulmonary Fibrosis Foundation.

“I am beyond grateful to my incredibly talented and generous friends for performing with me to raise funds for a cause that is so near and dear to my heart,” said Julie Halston. “The tireless work of the Pulmonary Fibrosis Foundation is leading the way toward a cure for this terrible disease.”

Halston and her husband, veteran newscaster Ralph Howard, created BROADWAY BELTS FOR PFF! in 2010 as a tribute to Michael Kuchwara, Associated Press theater critic, who died suddenly of pulmonary fibrosis. Howard was subsequently diagnosed with pulmonary fibrosis and received a life-extending lung transplant. Howard, a generous volunteer to both the PFF and many other organizations succumbed to complications from the disease in August of 2018.

The newly established Ralph Howard Legacy Award was awarded to Doug and Gay Lane for their extraordinary commitment to the pulmonary fibrosis community.  The award embodies Howard’s mission of fostering and supporting talent through mentorship, opportunity, and education.

“Broadway Belts for PFF not only provides funding for the PFF’s programs and research, but it also raises the profile of our cause,” said William Schmidt, President and CEO of the PFF. “Thanks to Julie Halston, the cast and crew of Broadway Belts, we are getting closer to a world without pulmonary fibrosis.”

BROADWAY BELTS FOR PFF! was directed by Carl Andress (The Divine Sister) with Christopher McGovern (Cagney) as Musical Director, Ed Windels as Music Coordinator and Greg Santos as Stage Manager. The benefit was produced for the ninth consecutive year by D. Michael Dvorchak, Sue Frost (Memphis, Come From Away), Julie Halston and Ed Windels.

About the Pulmonary Fibrosis Foundation

The Pulmonary Fibrosis Foundation (PFF) mobilizes people and resources to provide access to high quality care and leads research for a cure so people with pulmonary fibrosis will live longer, healthier lives. The PFF collaborates with physicians, organizations, patients, and caregivers worldwide. The PFF has a three-star rating from Charity Navigator and is a Better Business Bureau accredited charity.  For more information, visit pulmonaryfibrosis.org or call 844.TalkPFF (844.825.5733) or 312.587.9272 from outside the U.S.