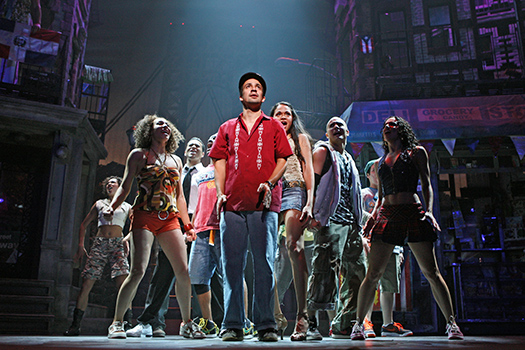 In a journey reminiscent of the unexpected zeitgeist success of Hair, A Chorus Line, and Rent, the story behind the success of In the Heights is so organic to New York City that no one expected it to happen. Beginning at a small, off-Broadway theater, a group of talented young artists led by composer-lyricist Lin-Manuel Miranda produced an original musical that some have called a modern day West Side Story-a Latin and Hip-Hop-infused musical odyssey telling the story of a neighborhood and the first-generation Americans who call it home. And yet, many in the show’s audiences have nothing to compare it to as it represents the first musical that they’ve journeyed below 125th Street to see. Opening on Broadway in spring 2008 and going on to win five Tony Awards-including Best New Musical-In the Heights on Broadway follows the cast and creative team as they embark on the greatest adventure of their young careers.

Partnering with The Global FoodBanking Network (see information and donation link below) In celebrat...

In the sequel to DreamWorks Animation’s Oscar®-nominated blockbuster comedy, the Templeton brothers—...

WATCH IT LIVE FROM 34TH STREET ONLY ON NBC THURSDAY, NOVEMBER 26, 9AM-NOON IN ALL TIME ZONES Hosts: ...

Eleanor, a young, inexperienced fairy godmother-in-training (Jillian Bell) who upon hearing that her...

Tina Fey to Host “One Night Only: The Best of Broadway” on NBC December 10

Tina Fey to host “One Night Only:  The Best of Broadway” special to benefit Broadway Car...

Dr. Seuss’ The Grinch Musical will air from the Troubadour Theater in London on December 9th o...

‘Josh Groban: An Evening of Harmony’ on PBS

Hallmark Channel Christmas – If I Only Had Christmas

Lifetime Christmas Movie – People Presents: Once Upon a Main Street