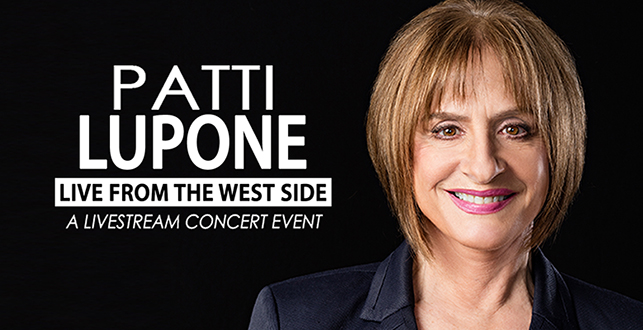 The live streams, a co-production of Dallas Summer Musicals and Entertainment Benefits Group, are being shared by more than 20 nonprofit arts presenters around the country.  Passes for Live from the West Side: Women of Broadway include access to the live performances plus an additional 72 hours of on-demand viewing. Proceeds will support the nonprofit arts presenters.

LuPone can currently be seen on Netflix as Avis Amberg in Ryan Murphy’s series “Hollywood” and recently won the Olivier and WhatsOnStage awards for her performance as Joanne in Marianne Elliott’s production of the Stephen Sondheim-George Furth musical “Company” in London’s West End.

Her recent New York stage appearances include the Scott Frankel-Michael Korie-Douglas Wright-Michael Grief musical “War Paint” (Tony, Drama Desk and Outer Critics Circle award nominations for Best Actress in a Musical); Douglas Carter Beane’s new play “Shows For Days,” directed by Jerry Zaks at Lincoln Center Theater; her debut with the New York City Ballet as Anna 1 in their new production of “The Seven Deadly Sins”; Joanne in the New York Philharmonic’s production of “Company”; David Mamet’s “The Anarchist”;  and Lincoln Center Theater’s production of the musical “Women on the Verge of a Nervous Breakdown,” for which she was nominated for Tony, Drama Desk and Outer Critics Circle awards.