One World: Together at Home – Live Worldwide

One World: Together at Home – Live Worldwide 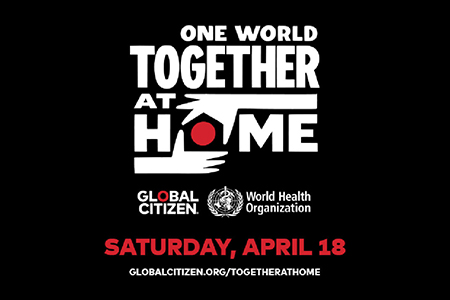 Hosted by Jimmy Fallon, Jimmy Kimmel and Stephen Colbert, the global entertainment special will celebrate the efforts of community health workers and promote the fight to end the global pandemic. It will feature multimillion-dollar pledges to the WHO’s Solidarity Response Fund.  — #TogetherAtHome

Where to Watch:
NBC, ABC and CBS, it will air on BBC One as well as Disney, NBC and ViacomCBS stations around the world. The full list of broadcasters includes Bravo, E!, MSNBC, NBCSN, NBC News, NBC News on YouTube, Peacock, Syfy, USA, ABC News, ABC News Live, Freeform, Nat Geo, Channel 5 in the UK, Network Ten in Australia, and Telefe in Argentina, BET and MTV globally across more than 180 countries, CMT, Comedy Central, Logo, MTV2, Paramount Network, Pop, TV Land and VH1 in the US as well as Bell Media platforms in Canada, MultiChoice, and Ireland’s RTE.