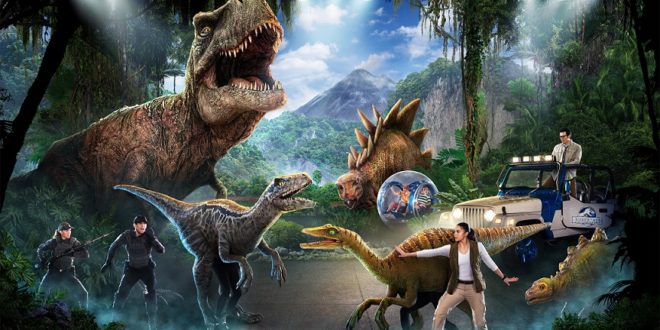 Jurassic World Live Tour, an exhilarating and unpredictable live, family entertainment experience brings the wonder and thrills of Jurassic World to generations of fans in their hometown arena with life-sized dinosaurs that delivers a colossal, edge-of-your-seat immersive journey.

Jurassic World Comes to Your Hometown in Major U.S. Arenas Through 2020

Tickets are now on sale for Jurassic World Live Tour, an exhilarating and unpredictable live, family entertainment experience that will bring the wonder and thrills of Jurassic World to generations of fans in their hometown arenas. The highly anticipated show will host its world premiere this fall in Chicago and continue touring the country with more than 65 stops, including major markets such as New York City, Boston, Los Angeles and Dallas.

With unrivaled arena production quality, Jurassic World comes to life against a backdrop of captivating scenery where dinosaurs from the iconic franchise, including fan-favorite Velociraptor Blue and a Tyrannosaurus rex more than 40 feet in length, take center stage. The production features more than 24 film-accurate, life-sized dinosaurs, each custom built with the latest technology, scientific precision and Hollywood studio quality. With scale, speed and ferocity, the animatronic and performer-operated dinosaurs deliver colossal, edge-of-your-seat, live entertainment unlike any other dinosaur experience.

Jurassic World‘s unmistakable score adds to the larger-than-life, immersive journey that will captivate fans of all ages. Through a combination of projection and practical scenery, the arena will transform into the dense jungles of Isla Nublar, where real Gyrospheres roll through the valley and scientists work to unravel a corrupt plan and save an all-new dinosaur from a terrible fate. With pulse-pounding stunts and an original, authentic storyline, this show is guaranteed to make memories that will last another 65 million years.

“Working with a world-class production team and Universal filmmakers, we have extended the Jurassic World canon with a new story that can only be told through this live, arena spectacular as we bring full-scale dinosaurs to generations of fans around the globe,” said Juliette Feld Grossman, Chief Operating Officer of Feld Entertainment, the worldwide leader in live, touring family entertainment. “We have maximized the power of everything we do at Feld Entertainment, pushing the boundaries of technology and innovation to ensure audiences have an authentic, awe-inspiring experience. Fans will leave with a sense of wonder, as if they’ve boarded the boat to Isla Nublar and literally stepped into Jurassic World.”

Tickets are now on sale for all 2019 and select 2020 U.S. engagements. Visit jurassicworldlivetour.com for tickets and a list of shows and dates near your hometown. Stay current on the latest developments through social media, including instructions on how to access presale codes for future Jurassic World Live Tour productions.

About Jurassic WorldFrom Universal Pictures and Amblin Entertainment, Jurassic World immerses audiences of all ages in a new era of wonder and thrills where dinosaurs and humankind must learn to coexist. Jurassic World is more than a film franchise. At every turn, this $5 billion film series delivers a larger-than-life destination for exploration, discovery, and epic adventure. Dinosaurs live again and they live in Jurassic World.