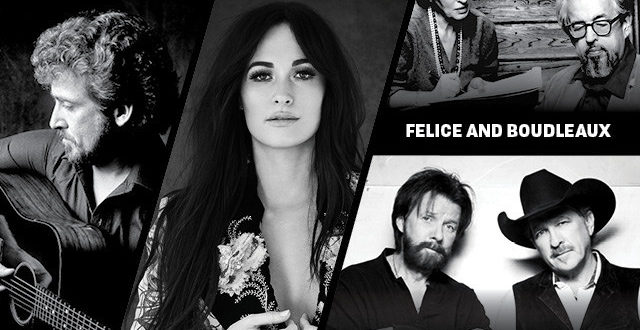 “Every year, the museum explores new stories related to the ongoing evolution of country music. As historians, we look at lives, and we look at the music created by the people who lived those lives,” said Museum CEO Kyle Young. “This year is no different. In 2019, we will tell the stories of a bluegrass-rooted country singer-songwriter whose life was cut short by tragedy; a songwriting couple elected to the Country Music Hall of Fame; a duo whose skillful songwriting, dynamic recordings, and rowdy performances made them one of the most popular acts of their day; and a rising country music star who does things her own way and is finding tremendous success doing so.”

The museum opens a special exhibit on Kentucky native Keith Whitley on Friday, May 3. The exhibit encompasses Whitley’s entire career, from his bluegrass roots to his success as a singer in a traditional style of country music with #1 hits “Don’t Close Your Eyes,” “When You Say Nothing at All,” “I’m No Stranger to the Rain,” “I Wonder Do You Think of Me” and “I’m Over You.” The installation will also look at Whitley’s influence on the country singers who followed him.

“I cannot express what an honor it is for the Country Music Hall of Fame and Museum to recognize the late, great Keith Whitley as such an important part of country music history. He was not only instrumental in giving me the confidence I needed as an artist, but through the years he has given many other up-and- coming stars the confidence and true grit they have acquired by loving and listening to the music of Keith Whitley,” said Lorrie Morgan. “This exhibit is not just Keith’s life in music, but it also depicts his love for country and bluegrass music. Keith always felt inadequate of the recognition he deserved. Keith was the most humble, generous, and truly the most talented man I have ever known. Before Keith’s death, he was three weeks away from his life-long dream of being made a member of The Grand Ole Opry, a surprise that he never knew about. Speaking for myself, his daughter Morgan, son-in-law Justin, his son Jesse Keith, daughter-in-law Kristen, his grandchildren Preston, Parker, Tuff, his unborn granddaughter, all of the Whitley’s and all of the Morgan’s, this is an honor we have longed to show the world. This exhibit is the life and times of Keith Whitley.”

This year’s winner of the Recording Academy’s prestigious Album of the Year Grammy, Kacey Musgraves will be the subject of an exhibit opening July 3. Musgraves has created a sound that is rooted in traditional style country music, but also draws on new influences. Her love of witty wordplay and her willingness to tackle what some may see as taboo subject matter have endeared her to like-minded artists such as John Prine and Loretta Lynn. This exhibit will trace her musical journey, which began in the 1990s in her East Texas hometown, Golden.

“I absolutely adore the Country Music Hall of Fame and Museum,” said Musgraves, “and it’s a privilege to have them curate an exhibit that will showcase pieces from moments all the way back to my childhood that are very special to me.”

An exhibit on award-winning duo Brooks & Dunn—Kix Brooks and Ronnie Dunn—opens Aug. 9. Initially united by their love of songwriting, Brooks and Dunn rocketed to stardom in the 1990s with their first four singles hitting #1. This success continued as the pair—the best-selling country duo of all time —remained leaders in country music for two decades with hits including “My Maria,” “Red Dirt Road,” “Hard Workin’ Man,” “Neon Moon,” and “Boot Scootin’ Boogie.” The museum’s exhibition will recall their early careers as solo artists and songwriters, the circumstances that united them as performers, and their innovative approach to stage production and touring.

“It’s so cool to have an exhibit at the Country Music Hall of Fame and Museum,” said Dunn. “When you’re reminded that what you have created is part of history like that, it’s beyond humbling. I’m so, so proud.”

“Ronnie and I are really fired up about having an exhibit at the Country Music Hall of Fame and Museum,” added Brooks. “We’ve shared some of our favorite things with the museum over the years, and it’s going to be really special for us to revisit those moments from our career, especially in a format like the Hall that reaches all generations of fans.”

Finally, on Oct. 4, the museum will open a special exhibit on songwriting husband and wife Boudleaux and Felice Bryant. The couple, who were the first full-time songwriters in Nashville, were elected together to the Country Music Hall of Fame in 1991. They found initial success in the 1940s when Little Jimmy Dickens recorded their song “Country Boy.” During the 1950s and 1960s, they had hit after hit with the Everly Brothers, including the siblings’ first big song, “Bye, Bye Love” and chart-toppers such as “Wake Up Little Susie.” Among the Bryants’ hits for others are Red Foley’s “Midnight” (co-written with Chet Atkins), Eddy Arnold’s “How’s the World Treating You” (also with Atkins), Jim Reeves’ “Blue Boy,” Bob Luman’s “Let’s Think About Living,” and Roy Orbison’s “Love Hurts,” later an international hit for the rock group Nazareth. One of the Bryants’ best known songs is “Rocky Top.” Popularized by the Osborne Brothers in 1968, “Rocky Top” is now an official Tennessee state song and the beloved anthem for the University of Tennessee’s athletic teams. During their distinguished career, the Bryants had some 800 songs recorded by more than 500 artists, amounting to sales of hundreds of millions of records. This exhibition is presented by the Willard and Pat Walker Charitable Foundation.

“Dad used to say that he thought their songs were like wine that aged well in their ledgers. Like wine, songwriters’ lives and bodies of work are the unpredictable product of earthly and heavenly elements,” said Del Bryant, son of Boudleaux and Felice Bryant. “Our parents would be thrilled that the museum is decanting their songs and their love story for all the world to taste and enjoy. They would have many people to toast. So on behalf of our folks, my brother Dane and I, and our entire family, thank God for all those who poured their hearts and talents into the full-bodied blend that is Boudleaux and Felice.”

The museum’s continuing exhibition Outlaws & Armadillos: Country’s Roaring ’70s, looks at the relationship between Austin, Texas, and Nashville during the 1970s, an era of freewheeling cultural and artistic exchange that skirted the status quo and changed country music. The exhibition opened in May 2018 and continues through Feb. 14, 2021.

About the Country Music Hall of Fame and Museum: The Country Music Hall of Fame® and Museum collects, preserves, and interprets country music and its history for the education and entertainment of diverse audiences. In exhibits, publications, and educational programs, the museum explores the cultural importance and enduring beauty of the art form. The museum is operated by the Country Music Foundation, a not-for-profit 501 (c)(3) educational organization chartered by the state of Tennessee in 1964. The museum is accredited by the American Alliance of Museums, and welcomes over one million patrons each year, placing it among the most visited museums in the U.S. The Country Music Foundation operates Historic RCA Studio B®, Hatch Show Print® poster shop, CMF Records, the Frist Library and Archive, and CMF Press. Museum programs are supported in part by the Metropolitan Nashville Arts Commission and Tennessee Arts Commission

More information about the Country Music Hall of Fame® and Museum is available at www.countrymusichalloffame.org or by calling (615) 416-2001.