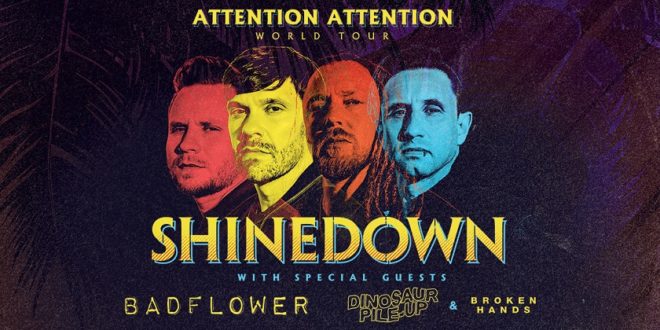 Shinedown’s new video for their anthemic single “GET UP,” (below)a collection of behind-the-scenes moments on tour and live footage from the road that gives an inside look into the powerful moments that “GET UP” is fostering between Shinedown and their fans. The uplifting #1 Active Rock and Top 25 Alternative hithas amassedmore than 27 million total streams, galvanizing listeners around the globe with its offer of hope, empathy and encouragement in the face of personal struggles, whatever they may be.

Shinedown’s chart-topping album ATTENTION ATTENTION, out now viaAtlantic Records, simultaneously hit #1 on Billboard’s Alternative, Top Rock and Hard Rock Albums Charts and debuted Top 5 on the Billboard 200. The story that unfolds as the album progresses is a poignant and enduring statement about humanity, touching on topics such as overcoming struggles, mental health, not being afraid to fail and the resolve of the human spirit as seen on tracks like “DEVIL,” and the anthemic “THE HUMAN RADIO”. Given the deeply personal nature of the record, Shinedown went in-house for production for the first time ever, enlisting bassist Eric Bass to produce and mix the album in its entirety.

# An Evening With Shinedown